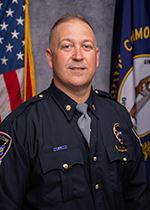 Major Wes Parks began his law enforcement career in March 1999 at the Office of the Fayette County Sheriff's Office in Lexington, Ky.  During his time there he served as a road deputy assigned to the Domestic Violence Unit.  In March 2001, he transferred to the Shelby County Sheriff's Office to be closer to his wife while she completed her graduate degree at Bellarmine University.  On January 3, 2003, he was selected to start the last Jefferson County Police Department lateral class.  Once merger was completed, he served in the 8th division and 4th division of the Louisville Metro Police Department as a patrol officer and as a detective.   In June 2007 he was selected to serve on the United States Marshals Fugitive Task Force  where he assisted in the apprehension of wanted violent offenders in the Western District of KY.

In addition, Major Parks graduated from Lexington Catholic High School and attended Eastern KY University and the Lexington Community College.  Major Parks has been through extensive training and holds certificates in Advanced Narcotics investigations by the DEA and Department of Criminal Justice Training (DOCJT), and Advanced Interview and Interrogation Techniques through the Reid institute and the (DOCJT).